This week on APTN InFocus, host Melissa Ridgen looks back at the most intriguing and monumental harvesting rights stories from 2020 and what comes next in 2021.

Mi’kmaw lobster fishers started their own moderate livelihood fishery in Nova Scotia and were met with violence, destruction of gear, and arson in a story that grabbed headlines around the globe last fall.

They now, separate from their treaty right to catch and sell fish, own the largest lobster company in Canada – Clearwater Foods.

APTN reporter Angel Moore updates us on what that means.

The Algonquin have been battling to protect dwindling moose numbers in their territory, and were met with harassment from non-Indigenous hunters who feel entitled to the animals, and indifference from politicians seen to want to appease both sides.

Amnesty International has weighed in calling on the federal government to protect the moose – a food staple in the food insecure region.

And an unexpected Christmas gift – Canada announced in December that in-ocean fish farms will be phased out within 18 months – a victory for seven First Nations and scientists, who for decades have said these farms are killing wild salmon.

InFocus speaks with reporter Kathleen Martens for a glimpse of what’s to come when those farms close down. 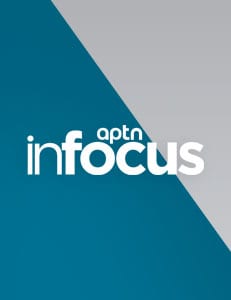