A First Nations woman is refusing to accept an apology from a non-Indigenous woman for comparing the trauma of residential schools to requests to wear a face mask.

Savannah George, of  B.C.’s Yuułuʔiłʔatḥ First Nation, said Angie Roussin has no right to use the traumatic legacy of residential schools for her own purposes.

George said she regularly speaks out on issues to help educate non-Indigenous people.

She tried again when Roussin, a small business owner in coastal B.C., used the oppression of Canada’s former Indian residential school system to illustrate what she feels are the dangers of wearing face masks. 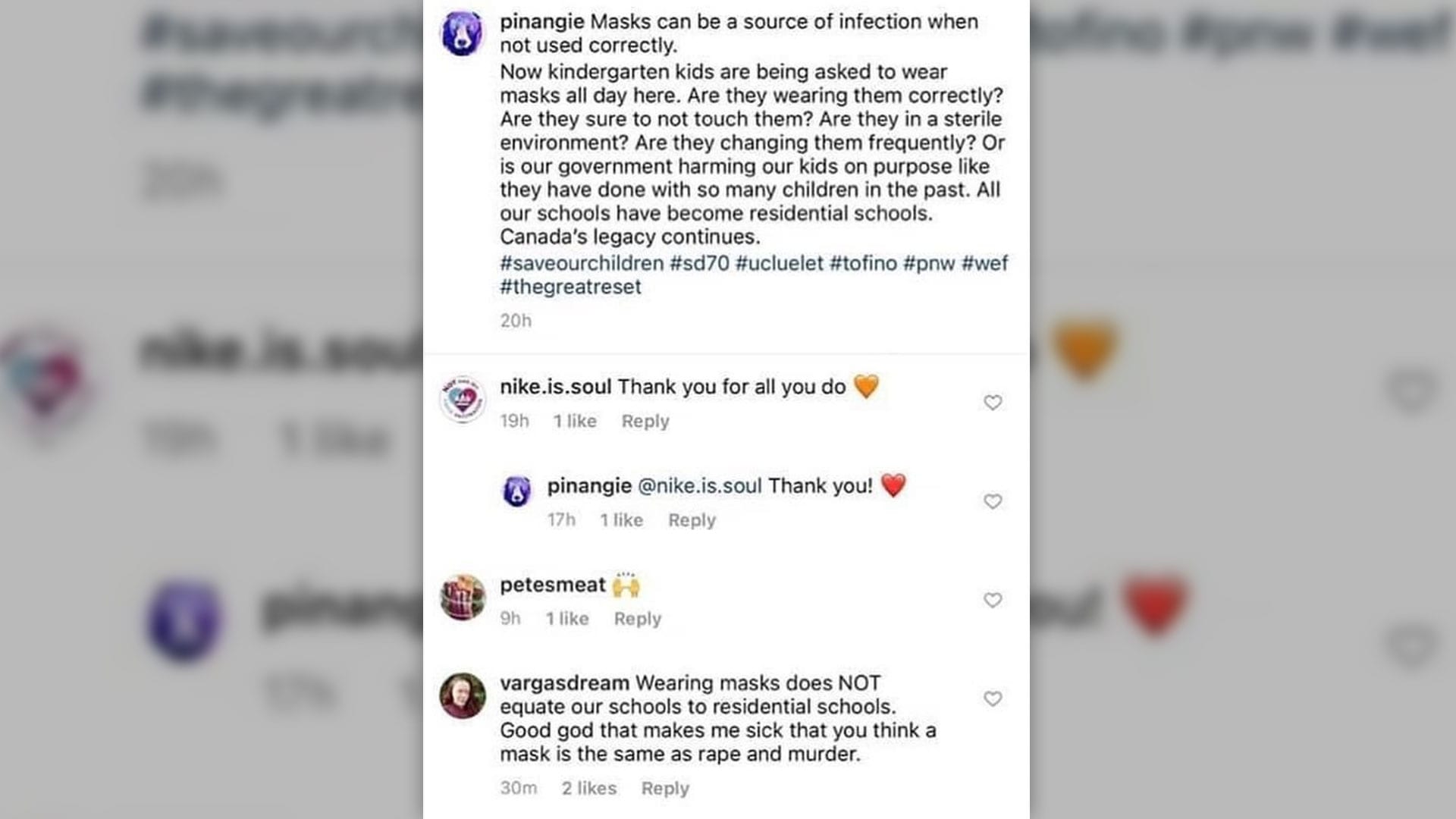 Roussin admits she made a mistake.

“And I made such a big mistake because I tagged it with our towns because I’m so upset.”

Roussin, an entrepreneur who owns Pina Styles, an art and clothing store with outlets in Tofino and Ucluelet, describes herself as “a conspiracy theorist.”

She said she is anti-vaccination and anti-mask, and believes the global COVID-19 pandemic was manufactured to thin the human race.

That’s why she said she used the atrocity of residential schools to push back against pandemic restrictions.

“I’m trying to stand up for these things and I’m trying to sound the alarm,” she said in a telephone interview with APTN News where she broke down in tears several times. “This is a planned pandemic.

“As a person who is very white and very privileged I don’t mind risking things.”

Roussin has since posted an apology on Facebook that George rejects.

“She told me she had zero experience with residential school,” George said in an interview Tuesday.

“She also told me to Google a man to teach me about survivors and my own intergenerational trauma.”

George further alleged Roussin was “disregarding and silencing the Indigenous voices” by deleting their critical comments on her original post.

Residential schools are a flashpoint in the colonial timeline of Indigenous Peoples in Canada. Thousands were sickened and abused while being stripped of their families and culture.

Marcia Callewaert John of nearby Vargas Island, whose husband is a residential school survivor, said Roussin offended members of the Yuułuʔiłʔatḥ, Tlaoquiaht,  and Hesquiaht coastal nations.

She noted Roussin’s stores operate on the unceded territories of the Ucluelet and Tlaoquiaht.

“Your words are beyond insulting to the Indigenous survivors of these schools,” she wrote under Roussin’s post.

Roussin, in that original post, said asking kindergarten kids “to wear masks all day here” was turning all schools into “residential schools.”

She added “Canada’s legacy continues” before including the hashtag “#saveourchildren”.

Callewaert John urged Roussin to speak with residential school survivors about the harm she was causing.

“Wearing masks does not equate our schools to residential schools. Good God that makes me sick you think a mask is the same as rape and murder,” Callewaert John said under the post.

“Yes it does,” Roussin replied.

“Wow. The fact that you would defend that is even more sick,” Callewaert John added.

In her apology, Roussin asked the community to unite against what happened in the past and what is happening now.

“Let’s stand together against the government, crown and corporations that have committed such horrendous crimes against humanity. Can we do that?”

“She has been sharing anti vax theories since the beginning of the pandemic and this is the second time our tight-knit community has taken issue with her social media posts,” Callewaert John said in an interview.

“But despite numerous Indigenous community members from several nations trying to educate her she was very firm in her stance.”

Roussin said she sees similarities between the pandemic’s health restrictions on children and what happened in residential schools, which operated in Canada as an assimilationist tool for nearly 100 years.

She also fears anyone with a different opinion is being censored into silence.

“I also feel the urge to include this mentality of hers…using others’ trauma isn’t the first. She’s also used Black Lives Matter and the Holocaust in the past,” George said.

Editor’s note: This story was amended 07/04/21 to add Savannah George’s first name and correct the name of her First Nation.