Nestled into the head of the Hathhayim [Von Donlop] Park Trail on Cortes Island, B.C, a forest of hemlock, fir and alder wraps around a small clearing recently levelled and fenced.

Soft water sounds come from a building with an open door. Inside, K’all-K’all Tina Wesley is leaning into a salmon incubator box.

As fisheries manager for Klahoose First Nation (KFN), Wesley does this at the community’s salmon hatchery every morning.

Wesley sees her hatchery work as one task of many, but an essential one to rebuild salmon stocks.

“Hatcheries are key and important, it’s returning back what we’ve taken,” she says. “If you take enough to feed us through the winter, it’s nice to be able to put it back.”

There have been significant salmon stock declines in recent years. Hatcheries operating in the Tla’amin and Klahoose territory are working to rebuild stocks in the face of climate change.

The hatcheries harvest eggs from spawning salmon and care for them through their development until they are ready for release or transplant into streams.

Every year, the Tla’amin hatchery’s target is to release 60,000 Coho, 100,000 Chinook, 1.5 million Chum, according to hatchery manager Lee George. “We do our best to meet those targets, based on abundance.”

The previous year had lower returns, and there were no surplus eggs to share with Klahoose.  As a result, Klahoose didn’t release any eggs in 2020.

Tla’amin hatchery emphasizes Chum, because it is the dominant species in Tla’amin River, and they return in higher volumes.

The advantage of Chum eggs is in their timing, explains Wesley. They start on land in incubator boxes and are transplanted to creeks in the spring. This is done before warmer temperatures can impact them. Additionally, the water levels are still high enough for them to survive.

“Compared to the other salmon…Chum are pretty tough [against the] elements,” Wesley says.

Between climate change impacting early stages, and over predation not all will survive to return to spawn.  With hope, the work continues at hatcheries.

Forty-thousand coral coloured spheres glisten in the water. They are Chum eggs, massed together as they like to be. These ones are tucked into a creek on Klahoose traditional territory.

The eggs started their journey at Tla’amin Hatchery.

Lee George is the hatchery manager. He has spent over 32 years nurturing the eggs through all their early stages.

The hatchery is north of Powell River, on the Tla’amin Creek. Their territory covers an expanse from the upper Sunshine Coast through the Johnston Strait, with overlaps of sister nations.

There are many factors impacting the salmon, one of which is warming waters.

“Where it’s colder, into the rivers and lakes where they’re supposed to spawn, but the water’s too warm, because of climate change,” George says.

“We’re going to have really poor survival rates because of climate change.”

George carries his Ayajuthem name Nexnohom in high regard, he says. It means ‘community provider.’

“At the end of the day, it’s going to be a long hard battle over the next few years, and we need to work together to seek a common goal, and that’s protect the resources for everybody to enjoy,” he says.

The Tla’amin hatchery harvests eggs from mature fish, known as broodstock, and begins the process of tending the growing eggs. When they have surplus, they share them to the smaller hatchery at Klahoose.

But there is more involved in rebuilding salmon stocks than simply having more eggs, Wesley says.

Some things she can improve, like providing the hatchery with power, light, fencing. But other concerns are out of her control — and they’re on her mind as she takes temperatures, cleans mesh over drains at the hatchery.

Climate change is a larger issue that shows itself in water levels and stream temperatures.

Wesley says the optimum temperatures for rearing salmonids are generally between 10° C and 16° C, but the actual range for fish in streams varies with food availability and the ability for individuals to obtain that food.

“When the waters are above 20° for days it brings stress and lack of oxygen and they die,” says Wesley. “Our hot summers have brought very warm temperatures to our waters, over 20°C.”

“Another thing with the climate, you’re also dealing with the water supply. One year, 2017, we ran out of water. So the fry were there and we need to keep them in water. We couldn’t. So they got an early release.”

Warming climate has reduced the snowpack, she says, and this is also on her mind.

“I’m a snow dancer,” says Wesley, as she explains snowpack is essential for water levels. The Chum need a steady supply of oxygenated, flowing water washing over them constantly in the incubator.

He explains the differences between salmon species. Sockeye needs a lake system, and that’s a system beyond what small hatcheries can address. Coho stays in their stream for a full year, and so they’re at risk for low water levels, and the resulting warmer water temperatures.

Chum stay only a couple of weeks once they are hatched, and in the spring there is a better chance of cooler temperatures and higher water levels.

Cortes Island Streamkeepers are a project of Friends of Cortes Island Society, a local environmental charity. Robinson says the streamkeepers reasoned with DFO through the DFO community advisor, and successfully won them over to trying Chum fry in local streams.

“We just were the ones to advocate for a couple of changes, to shift the focus from Coho to Chum,” says Robinson. “In the summertime, you know, we’re having hotter and hotter summers, unfortunately the streams are getting lower now compared to their historic level. Whereas the Chum and the Pinks- they go in, and there’s a couple of weeks  when they swim up out of the gravel, and then they’re gone.”

They leave for the open oceans.

“And that happens in the spring when there’s lots of water. So it doesn’t bother them if the whole stream gets warm and low in the summertime.”

The switch to Chum is not widespread, says Robinson. DFO focuses hatcheries on raising the Chinook and Coho — which are what sport fishermen prefer.

”The focus has been on Coho and Springs (Chinook) because they’re the flashy ones,” says Robinson. “The one that the sports fishermen are all after and that’s what everybody thinks about. To recognize the dire need and then shifting, I think it’s critical. Climate change is going to make that switch in focus imperative.”

“With the situation of the sockeye not returning and the closures, the nation has been relying heavily on the salmon returning to the Tla’amin river and the species that’s more appetizing to them is the Chum,” explains George.

Similar to the hatchery at Tla’amin, Robinson emphasizes the importance of public awareness and education. “I wish people would fall in love with the fish,” says Robinson.

He says when people build a personal relationship, “that’s when they want to look after them. That’s what I would hope. Ultimately, you can’t just rely on the DFO or any organization. It has to be a bigger movement. That would be a dream,” says Robinson.

“In the meantime, their numbers dwindled to almost nothing.” says Robinson, “but now they can access their ancestral habitat.”

Returning to their ancestral home

She left home at 17, and steadily gathered education and fisheries experience. She hoped to bring these skills home to her community if an opportunity arose.

“Coming back was a long life goal and opportunity that I had waited for. Coming back home, and taking on a position for protecting our resources, which is huge for me.”

Her Ayajuthem name K’all-K’all means “cedar maker”. She shares how her grandmother and father explained the meaning of this name. While she talks, she uses a protective gesture of wrapping a cape around someone, “K’all-K’all.” She protects, and cares for her family and community.

Wesley speaks about this food and resource by drawing the full circle. Feeding people and animals includes nourishing land and culture.

But through the work they are doing she hopes to ensure salmon survive.

“Imagine all the other little hatcheries and the bigger hatcheries, that we’re all putting our input into providing future sustenance,” says Wesley. “Anything to contribute to help bring it back and keep going and moving forward. It’s bringing them home.”

This past fall, Wesley noticed 30 eagles sitting by a small stream that runs from beside the hatchery into the estuary.

“Boy, there’s a lot of eagles over there,” she remembers thinking. “So I went for a walk, to go check it out and here’s all these Chum going up our little creek. It was just neat to see that,  they always returned home where they come from.”

Wesley believes those fish were from eggs that had slipped through the drain in the old system, or maybe eggs that were not quite dead in the culling and had survived.

Like Wesley returning home with skills to help protect her nation’s resources, the escaped eggs worked hard to find their way home. 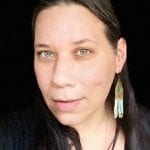