Outstanding young Indigenous athletes on Vancouver Island are being honoured this week for their outstanding achievements in sports.

The Premier’s Awards for Indigenous Youth Excellence in Sports are given each year to youth under 25 years-old in six regions of B.C. who compete in a sport and demonstrate commitment to their practice and community.

The awards are given in collaboration with the Indigenous Sport, Physical Activity & Recreation Council (ISPARC) and the B.C. government through a regional nomination process.

On Tuesday, the ISPARC announced the six youth recipients in the Vancouver Island region.

Recipients this year include a soccer player, a war canoeist, a lacrosse player and more.

Melanie Mark, B.C.’s minister of tourism, arts, culture and sport, sent congratulations to all the recipients, saying she’s proud of their accomplishments.

“Your outstanding achievements are a source of pride, especially for your family, coaches, and everyone who has supported and encouraged you along the way,” she says.

“More than ever in these challenging times, we need young people like you to give us hope. Keep following your dreams and reaching for the stars.”

Due to the pandemic restrictions, the award celebrations could not be held in person this year. Instead, a series of commemorative videos highlighting each of the region’s athletes and celebrating their outstanding achievements were produced through ISPARC.

Williams is a straight-A student who has previously been named athlete of the year at her school, as well as the first Indigenous valedictorian. She says she’s honoured to be a regional recipient in the category of volleyball and basketball and she thanks her friends, family, coaches and teammates.

“I wouldn’t have gotten any of the awards today without the hope of them,” Williams says.

Thomas is a soccer coach for her First Nation and the captain of her regional team. She hopes to score an athletic scholarship and make the Canadian women’s national soccer team. She says she wants to congratulate all the other recipients, and thanks everyone she has played with over the years.

“I’ve had many talented teammates over the years who have become close friends,” she says.

Whitehead, handpicked for ISPARC’s box lacrosse development squad roster to compete in the North American Indigenous Games (NAIG), has strong connections to his culture. He introduces himself through his grandmother and gives thanks to everyone who has helped him to achieve his athletic success. He also recognizes the many other youth who could have also been chosen for the award.

Brager, who loves cooking traditional food, is a swim racer who is determined to become an engineer and Olympic athlete in the future, he says. When COVID-19 shut down local pools, he continued training outside, “in hopes that I would still swim in the Olympic trials which were cancelled at the end of March,” he says.

Megan McCool, from the Métis Nation BC is a multiple provincial gold medal award winner for Smallbore Rifle competition.

Aside from her expert rifle precision, McCool has been volunteering at a local salmon hatchery for a decade and is proud to have learned how to sew her own ribbon skirt from her Elders.

McCool says she would like to thank ISPARC, her coach Steve, her parents for “dragging me out there even when I didn’t want to go,” and her grandparents for “their continuous support and being by my side or behind me whenever I needed them.”

Earning a spot at the International Canoe Federation Canoe Sprint World Championships, George is a volunteer role model in her community and is learning her grandfather’s first language Oneida.

George has plans to become a surgeon. She says she wants to thank her crew for “helping me persevere through tough moments.”

“I am confident that this is only one victory in many to come for all of you,” he says.

“As you celebrate this award and recognition, I want you to know that I, and your community, are proud of your hard work and commitment to healthy living. May this acknowledgement push you to continue to pursue your goals both on and off the field of play.” 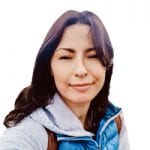