Mi’kmaw leaders are raising concerns about the impact of Canada’s new fishing deal on treaty rights.

George Ginnish, the chief of the Natoagenag First Nation in New Brunswick, calls the federal government’s new Rights Reconciliation Agreements “a stall tactic for another 10 years.”

“You’ve got the highest court in the land saying ‘this is the law.’ And it’s been 20 years,” said Ginnish. “You need to honour the relationship and you’re not. You are not.”

The court said Marshall and all Mi’kmaq, Wolastoq and Peskotomukahti people had the right to “a moderate livelihood.”

The Department of Fisheries and Oceans’ (DFO) response to the Marshall decision was to provide access to the existing commercial fishery in the Atlantic region.

Ginnish said the first round of fishing deals after Marshall weren’t fair. 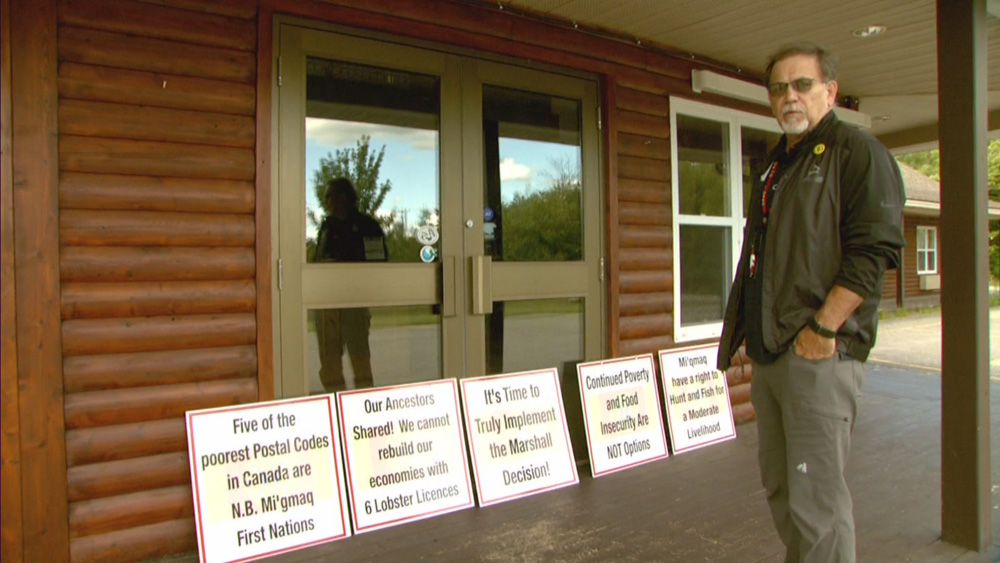 (George Ginnish stands in front of a series of signs from a community protest held outside of DFO offices in Moncton, New Brunswick last spring. Photo: Trina Roache/APTN)

His community was excluded from lucrative fisheries like snow crab. Ginnish has been pushing the DFO for access but talks have led nowhere.

He said the new deals neither address historical inequities nor rights in the future.

”The new treaty discussions are supposed to be about actual rights, recognition, and implementation,” said Ginnish. “And they’re calling it a rights recognition process.

The Canadian government has made no legislative or regulatory changes to reflect a rights-based fishery, he said.

“If the government’s and DFO’s interpretation of treaty is only commercial buyback then nothing is going to change,” said Ginnish. “And it is not treaty, it’s not moderate livelihood.”

Ginnish isn’t the only one frustrated.

Fred Metallic is the director of Natural Resources in the Mi’gmaq community of Listuguj, Quebec.

“If you’re trying to reconcile your relationship with Indigenous people,” said Metallic, “you cannot continue to uphold the law as a tool for exclusion, as a tool for marginalization, as a tool to support economic racism in the territory.”

At the Assembly of First Nations annual meeting in early December, the chiefs passed a resolution calling on Canada to implement the 1999 Supreme Court ruling.

The assembly agreed to “Call on the Prime Minister to acknowledge and recognize that First Nation signatories to the 1760-61 Treaty are entitled to exercise their constitutional right that was recognized by the Supreme Court of Canada.”

APTN Investigates asked the Prime Minister’s Office for a response.

We received a statement from DFO, instead.

“Our government is committed to renewing its relationship with Indigenous peoples,” wrote Cecely Roy, speaking for the minister of Fisheries and Oceans.

Roy referred to the 1999 Marshall decision and said, “Since that time, the department of Fisheries and Oceans has been working at negotiation tables to implement the right in communities across the Atlantic coast.”

The first round of fishing deals signed with most of the Mi’kmaw and Wolastoqiyik bands in the early 2000s, explicitly did not recognize treaty rights. 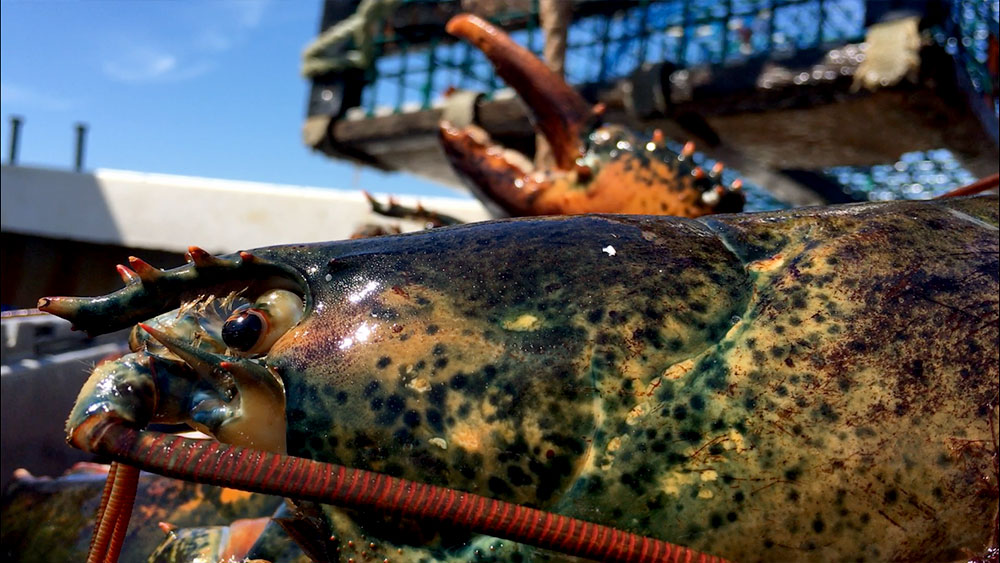 (A former director for DFO says a new policy approach towards fishing should have been done 20 years ago. Photo: Trina Roache/APTN)

Jim Jones was a regional director for DFO at the time of the Marshall decision.

He’s now a federal negotiator for the department.

He contrasted the past deals with the new Rights Reconciliation Agreements, or RRAs.

“The Marshall Response Initiative was a policy approach,” said Jones. “This one though, fundamentally more, it does recognize the right exists which I think is a major move for Canada.

“It probably should’ve been done 20 years ago. It wasn’t.”

Jones said the DFO, along with Crown-Indigenous Relations and Northern Affairs Canada, wanted to reset the relationship with Indigenous communities.

“So part of it is, can we negotiate new agreements that would not define what the scope of the right would be but rather simply allow for greater utilization and greater access,” said Jones.

Three bands have signed on so far.

The Elsipogtog and Esgenoôpetitj First Nations in New Brunswick signed a joint agreement. And the Maliseet of Viger in Quebec signed another. 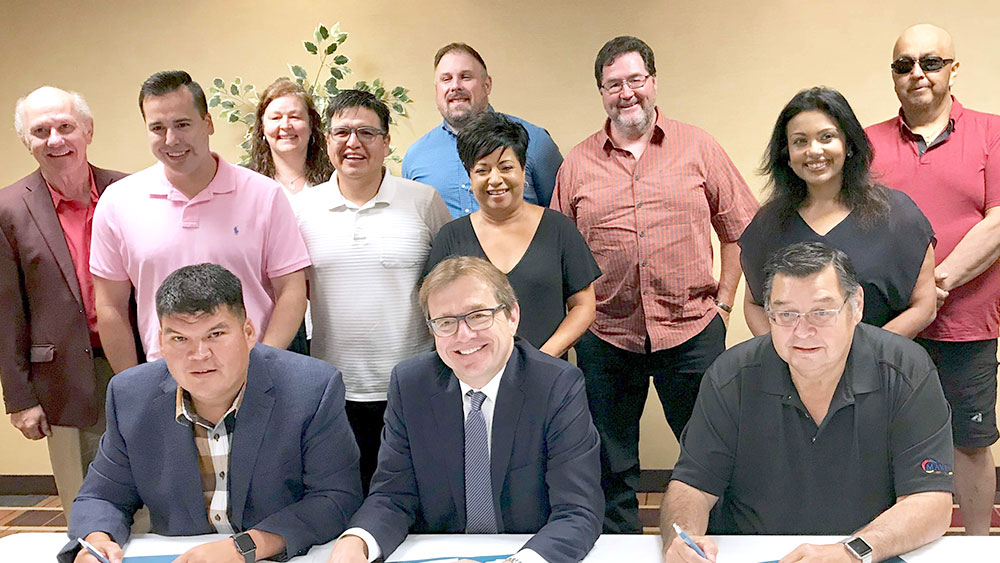 (Three bands in Eastern Canada have signed onto the deal. Chiefs in Nova Scotia rejected it. Photo: Trina Roache/APTN)

The chiefs in Nova Scotia rejected the deal.

Mi’kmaw leaders are raising a red flag about what the Rights Reconciliation agreements actually do to rights for the duration of the agreement, which could be anywhere from 10 to 25 years.

APTN obtained a copy of a draft agreement.

A predictability clause states that the bands who sign the agreement won’t sue DFO, and will “only exercise Section 35 rights related to matters addressed in this Agreement consistent with this Agreement.”

So in other words, fish under the DFO rules for the existing commercial fishery.

Mi’kmaw leadership has consistently maintained that isn’t an implementation of the Supreme Court’s Marshall Decision.

“You know, to be asked to sign into a new process and lock up our rights for another 10 years, non-implementation of treaty rights, we’re saying no,” said Ginnish.

Fred Metallic pointed out the irony that an agreement called Rights Reconciliation puts rights on hold.

“It doesn’t make sense that I would recognize your right and then quiet your right,” said Metallic. “Then you’re not really recognizing that right.”

When asked about the clause, Jones said predictability is needed in a $3 billion a year industry that supports 25,000 jobs and sells three-quarters of its product to international markets.

”Are there uncertainties that people exploit in the markets where we sell our products that could affect us, that’s what the discussion is fundamentally about,” said Jones. “At the end of the day, uncertainty is bad for business. Fishing is no different.” 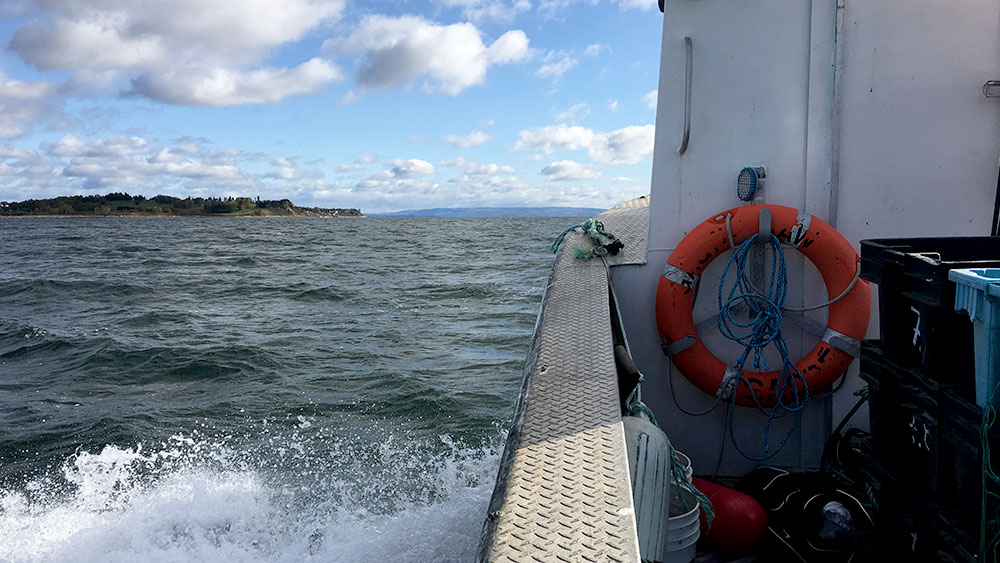 Kevin Anderson is a senior advisor on Indigenous relations for the Department of Fisheries and Oceans.

“I would note that the department is keenly aware of its obligations under the constitution with respect to Aboriginal rights in Canada and continues to look for opportunities to ensure implementation,” said Anderson.

“Equally so,” he continued, “the department has a very strong interest in a stable fishing industry where First Nations are working with the other components of the industry.”

Co-management, co-development, co-governance are key words in the new language around the DFO’s relationship with First Nations.

In 2018, Listuguj had entered a Rights Reconciliation Framework Agreement to talk about rights and Metallic had been optimistic.

Listuguj would soon find out when they put forward a plan to commercialize its fall food fishery for lobster.

“It’s not just about making a few dollars, it’s about supporting community,” said Metallic. “Asking us to just fish for food, for sustenance goes back to this perspective that for thousands and thousands of years we just wandered this territory, hoping to find food.

“That narrative has to stop when it comes to doing an analysis of our fisheries.”

The reality is that fishing costs money. There are a lot of expenses involved.

Under the DFO regulations, the food fishery catch can only be used for food, social or ceremonial purposes. It can’t be sold.

Listuguj wanted to feed the community and then sell some of the catch to offset costs. 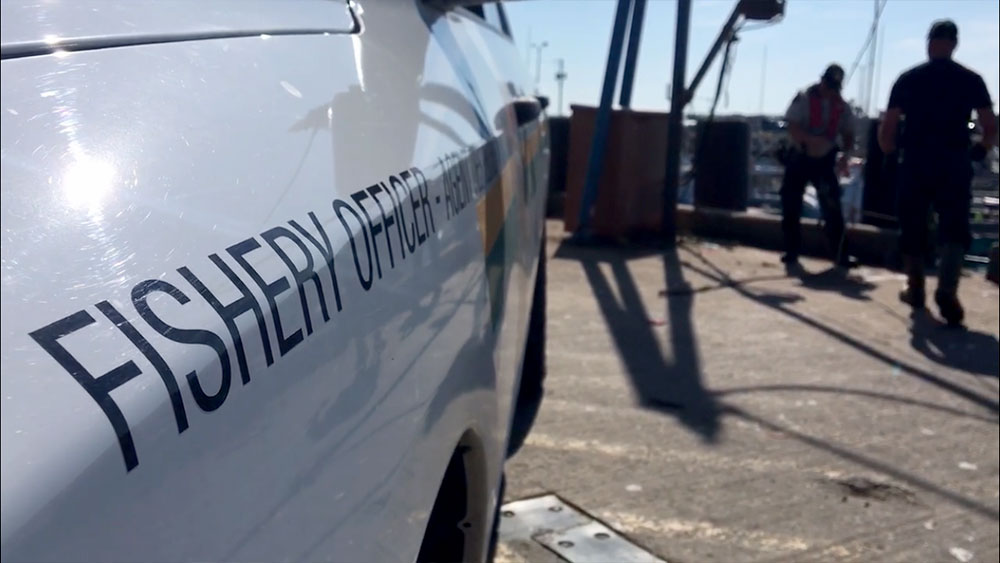 (‘It is prohibited to buy or sell fish unless they are caught and kept under a Native Community Fisheries License that states that the minister has authorized the sale,’ says a letter from DFO. Photo: Trina Roache/APTN)

But under Canada’s Fisheries Act, the minister is the ultimate authority.

And in the end, the answer was no.

“Deeply disappointed, disheartened, and frustrated as well,” said Metallic. “How do you move forward in good faith with the Minister of Fisheries and Oceans, with Canada, if reconciliation, recognition of Indigenous laws, if partnership are just rhetorical concepts?”

Listuguj went ahead with their plan anyway and sold some of the food fishery catch.

The DFO sent out a letter to scare off buyers.

“It is prohibited to buy or sell fish unless they are caught and kept under a Native Community Fisheries License that states that the minister has authorized the sale,” the letter read. 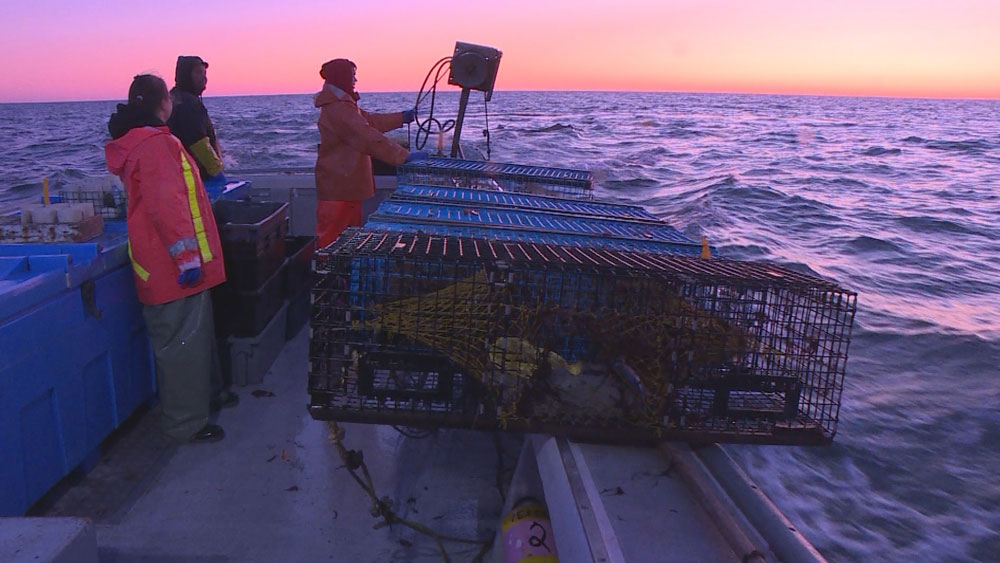 (‘It seems like the upper echelons of government are not ready to recognize that the Mi’gmaq have a commercial right.’ Photo: Trina Roache/APTN)

It warned that the Conservation and Protection Branch of the DFO would audit buyers and that anyone caught selling, bartering, or trading lobster from Listuguj’s food fishery could face potential legal action.”

The letter concluded, “We are counting on your cooperation to ensure orderly and sustainable fishing.”

“Again, it’s this narrative that Indigenous peoples are a problem to the Canadian people, a problem to Canadian society,” said Metallic. “That narrative of the Indian problem has to stop.”

Listuguj is taking the DFO to court to ask for a judicial review of the minister’s decision to deny the commercial licence.

Watch | Living Treaties – Part 1: 20 years ago the Supreme Court ruled on Mi’kmaq fishing rights, so what has changed?