Canada’s new food guide announced earlier this week in Montreal may not be relatable for many Indigenous people, but Health Canada officials say there are Indigenous-specific resources coming for First Nations, Inuit and Métis.

Lauded for its reduced emphasis on meat, dairy and sugary drinks and its promotion of water, whole grains and plant-based proteins, the food guide—updated for the first time in over a decade—will influence health professionals, educational institutions and others in determining what foods Canadians should consume for optimal health and nutrition.

But the colourful palette of fresh produce, grains and proteins—like chickpeas and tofu—adorning the guide’s front page doesn’t necessarily represent or reflect Indigenous peoples’ food preferences or the barriers that many face in accessing healthy foods.

“If you’re giving guidance on what to eat you can’t realistically put those guidelines into action if there’s a big gap there,” she says, explaining food guides “are based on western nutrition research evidence.

Indigenous communities have developed “their own knowledges and their own practices [that have] worked and made people healthy.”

Delormier is also the associate director of McGill’s Centre of Indigenous Peoples’ Nutrition and Environment and was invited by Health Canada to share feedback on drafts of the new guidelines.

She says there are challenges in developing a single nutrition guide for Canada’s diverse population, but that Health Canada’s increasing recognition of Indigenous peoples’ unique histories, nutritional needs and relationships between food, culture and identity is a step in the right direction.

Health Canada’s website says the new resource is “inclusive of Indigenous Peoples,” but that the 2007 Canada Food Guide for First Nations, Inuit and Métis “can still be used as a trusted source of information on healthy eating to support Indigenous peoples until new tools are available.” 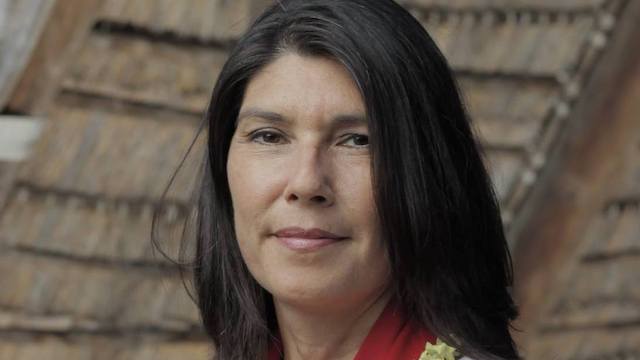 McGill nutritionist Treena Wasonti:io Delormier of Kahnawá:ke says Canada has the ability to support Indigenous communities in developing their own food guides based on local and traditional knowledge. Photo: McGill University.

Health Canada says they are working with Indigenous Services Canada, First Nations, Inuit and Métis “to support the development of distinction-based healthy eating tools as part of the revision process.”

“For the most part people who are food insecure are not going to be able to easily put these guidelines into their everyday lives.”

Delormier says some communities have begun creating their own food guides, and that government support for the resources necessary to do this at local or regional levels would be “innovative” and a “positive step forward.”

A Health Canada spokesperson told APTN News details of the “distinction-based” food guides it’s developing for Indigenous peoples “are scarce at the moment.”

A spokesperson for Inuit Tapiriit Kanatami (ITK) told APTN that Health Canada officials met with the organizations—which represents the interests of Inuit in Canada—food security working group days prior to the new food guide’s release.

But that it’s too early to know what will come from the discussions.

Delormier says food security and food sovereignty are “central” to discussions of nutrition for Indigenous peoples.

“We have to figure out [how to create] open spaces where communities can integrate their own knowledge with the scientific evidence to create something that’s going to honour their ways of knowing, their food systems, and then provide useful guidance for eating and everyday context.”

Delormier says now that traditional foods have been identified as “important and nutritious,” the next question is: “how do we now make programs, or learn from other programs, that support…communities to access food that is their right to access?”

She says that question directly relates to food sovereignty, which is “the notion that people have control over their food systems.

“But Indigenous food sovereignty then becomes about Indigenous peoples’ self-determination around accessing their foods, and rights and access to land,” she continues.

“Some of these situations can be difficult to navigate because of different levels of legislation that can make it difficult for Indigenous communities to practice their rights to access their food systems.”

Canada has promised to implement the United Nations Declaration on the Rights of Indigenous Peoples (UNDRIP) into Canadian law.

Article 20 of UNDRIP states Indigenous peoples “have the right to maintain and develop their political, economic and social systems or institutions, to be secure in the enjoyment of their own means of subsistence and development, and to engage freely in all their traditional and other economic activities.”