Police chiefs Keith Blake and Dale Cox both say the First Nations they serve are not interested in a provincial police service in Alberta.

Their communities are served by a local police board and police departments that reflect Indigenous values and culture, practice cultural awareness and are community-focused.

They said the letdown is the First Nations Policing Program (FNPP).

The FNPP (now called the First Nations and Inuit Policing Program or FNIPP) has long been criticized for not providing enough money to support police services on First Nations.

“We, as part of that program, have been set up for failure. But despite all of that, you’ll see successes” said Keith Blake, police chief of the Tsuut’ina Nation Police Service.

The Tsuut’ina Nation Police Service is one of three self-administered police departments in Alberta funded by the FNIPP.

In January 2022, the Canadian Human Rights Tribunal ruled in Dominique (on behalf of Pekuakamiulnuatsh) v. Public Safety Canada that the First Nations Policing Program underfunded police services in the Inuu community of Mashteuiatsh in Northern Quebec about five hours northeast of Montreal.

The tribunal ruled that not providing equivalent funding to that of a non-Indigenous police department amounted to discrimination.

The First Nations policing program also limits the police work to what is called core policing. They cannot have specialized units like identification, canine, or even a drug unit.

Syniak said his colleagues have the skills to wrap up many investigations but are required to wait for the RCMP.

He recalls a murder investigation where everything was done, but they still had to wait.

“We had the scene looked after. Ident was already there. We had the bad guy in custody. We had witnesses interviewed. And we still have to call major crimes to come in and basically like review stuff and lead the charge,” he said.

“And it didn’t make sense.”

It can sometimes be hours or even the next day before backup arrives, often from Edmonton, a three-and-a-half-hour drive away.

Dale Cox is the chief of the Lakeshore Regional Police Service which serves five First Nations in northern Alberta along the shores of Lesser Slave Lake.

He said those delays cost money because the crime scenes need to be secured until major crimes arrives and that can be troubling for a department that doesn’t even provide 24-7 service.

“Our workload is so high that we end up with burnout among our members,” he said.

“I’ll only have one police officer working. That’s not safe for the communities. It’s not safe for the officers. So we end up at times, depending on the seriousness of the call, not being able to attend until we have backup. And those are calls that are very serious and very dangerous,” Cox said.

“It’s hard to sit in a driveway when you know there’s a domestic or something going on and then you have to wait 40 minutes or longer. And I know that, so guys just used to go,” he said.

‘We have to stop denying it’: CHRT says Canada is discriminating against Indigenous police forces

It allows Alberta sheriffs and Alberta Fish and Wildlife officers to respond to calls for police service in rural areas.

Something Cox said doesn’t help them.

“The RAPID response that you speak of that Alberta put out really, really would be of no assistance to us because those resources that they want to put into those are not present in our area or if they are, they’re very, very limited,” he said.

The Tsuut’ina Nation Police Service, on the city limits of Calgary, is far less rural and backup is less of a concern.

“We have an officer complement that usually supports it for us to enable to do it in-house without receiving that support. But I can tell you, there are circumstances where we rely on the Calgary Police Service, another great policing partner, to enhance that when needed. We also rely on the RCMP,” said Keith Blake.

“But I can also say that we also provide that similar support to both those organizations where our officers provide backup to the RCMP members in our neighboring jurisdictions and as well as to the Calgary Police Service.”

Blake said there is no interest in a provincial police force.

“I know for a fact that our nation’s leadership is not supportive of the construction of a of an Alberta provincial police service,” he said.

Cox said the communities he serves feel the same way.

“I know that our five nations are not interested in the Alberta provincial police service being here. They’re very happy or they want to continue with self-administered police service where the members of their community are the make up of the police commission,” he said.

Both chiefs acknowledge a history of policing by the RCMP that makes self-administered policing appealing to First Nations.

The FNPP, started in 1991, allows two pathways for police funding on reserve.

One path is for a First Nation or tribal council to start its own, self-administered, police force, or they can contract with another police body, the RCMP.

The program has fallen short of the needs of the communities it serves for the decades it’s been in existence.

The government of Canada has acknowledged these shortcomings in recent years but still hasn’t fixed the program.

In an email to APTN Investigates, the Alberta Ministry of Justice said the federal government needs to unfreeze the program and enter into discussions with Alberta to provide more funding for First Nations policing.

In an email, Public Safety Canada said they fully support the program and wish to see it expand to more communities.

They are also seeking engagement from First Nations on new policing legislation.

Public Safety also said that the CHRT erred by not recognizing the beneficial impact of the program. 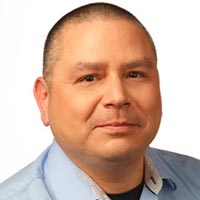